A classic of modern Lithuanian painting L. Surgailis at the Alanta Estate Gallery 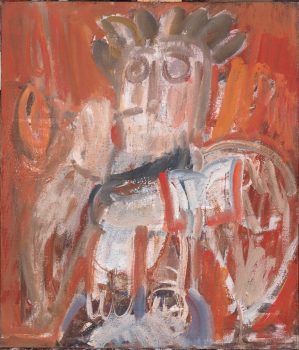 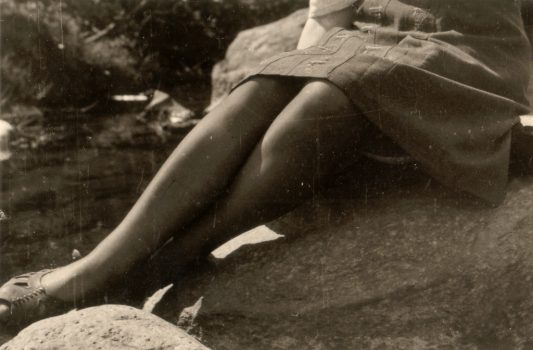 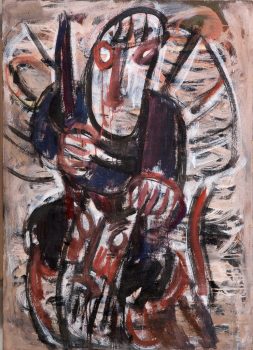 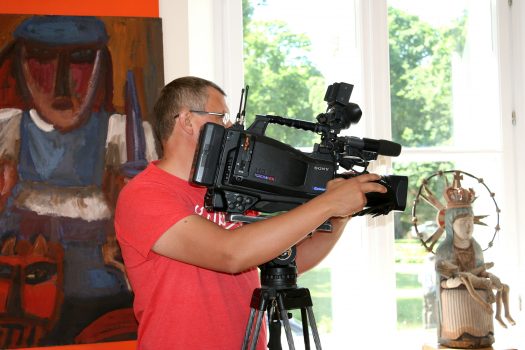 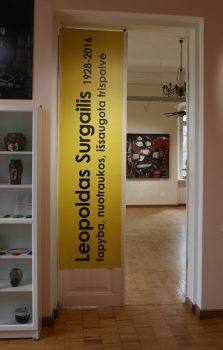 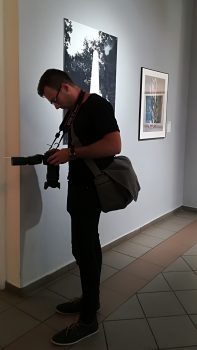 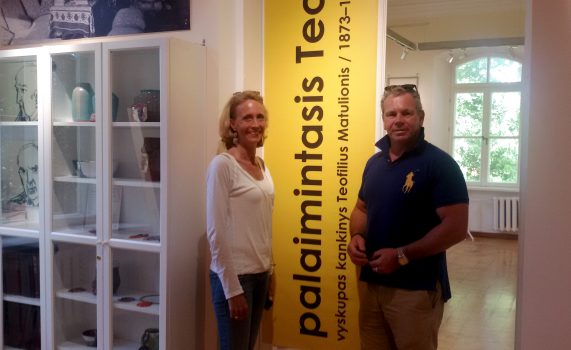 Small wooden eggs brought by Bishop Matulionis to his nos, ieces as souvenirs from abroad, Christmas decorations cut out by him from paper, an intricate double altar also made by the bishop, his embroidered initials on the surplices and the jacket lining.

These items will be on display in the exhibition Blessed Teofilius Matulionis in his homeland Alanta, is a continuation of the series of exhibitions dedicated to the beatification of Bishop Martyr T. Matulionis.

The exhibition also contains Bishop father’s baptism certificate, the certificate of marriage of the bishop’s parents Jurgis and Ona (nee Juočepytė), and the birth certificate of Teofilius Matulionis from the Alanta church archives. It also features 30 stands with photographs of the bishop and his numerous family members – brothers, sisters, their spouses and children.

The exhibit also features inter-war postcards sent by T. Matulionis to his relatives from Berlin, Alexandria, Rome, letters he sent from the prisons of Orsha and Vladimir (1947-1953) with many cross-outs by the prison censors, letters written in Lithuanian at the Special purpose institution – Potma Home for the Disabled in Mordovia ASSR (1953-1956), after the death of Stalin and the bishop’s amnesty. Matulionis did not write his letters in standard Lithuanian (and it is amazing!). He wrote in the Aukštaitian dialect and included many words borrowed from Latvian and Russian. Errors of a holy man are just as holy and should by no means be corrected. 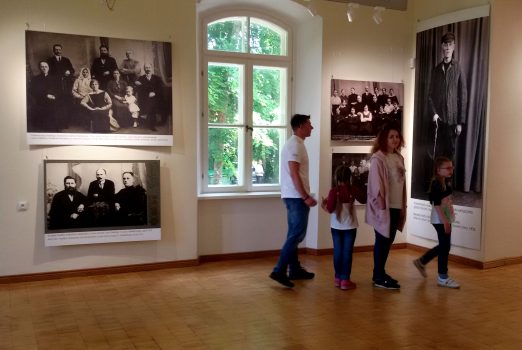 The exhibition Blessed Teofilius Matulionis in his homeland Alanta features a few small but fancy exhibits, given to Bishop T. Matulionis after his return to Lithuania from imprisonment in Soviet prisons and labor camps in 1933 or brought back from his trip to America in 1934-1936.

What are those narrow rose decorated ribbons and thin prayer notes? They are documentary testimonies of prayers with intentions and spiritual sacrifice very popular in the Church environment of the time. For example, on September 22, 1934, on the eve of the bishop’s trip to the United States of America, he received a “modest prayer crown” from students of the Kaunas Metropolitan seminary: 548 of the Mass, 33 novenas of St. Therese of the Child Jesus, and 167 of good deeds. He also received a similar prayer testimony from the Benedictine Sisters of Kaunas and students of the Girls Gymnasium of the Congregation of the Sisters of St. Casimir. In 1937, the Benedictine Sisters of Kaunas gave Bishop. T. Matulionis a written document of their 2000 “zealous acts of love”.

Nowadays these statistics may elicit a smile, but they are proof that people cared for their beloved bishop and prayed for him during his imprisonment. Who knows if the “zealous acts of love” played any part in the legal case of the martyr bishop and the “divine bookkeeping” on the whole, but the approaching beatification is proof that they were of great value.

The exhibition in Alanta manor contains a letter from the Sisters of Jesus Crucified with “spiritual flowers” given to the bishop in 1935 during his visit in the US: Mass, Communion, Stations of the Cross, rosaries, litanies – 138 of each, as well as 138 000 short prayers. The spiritual gift from the orphans fostered by the sisters: 100 Masses, Communions, Stations of the Cross, and 1000 children’s prayers. Even during the war, on May 2, 1943, in Kaunas, participants of Eucharistic Adoration handed their spiritual greeting and a prayer testimony to Bishop Teofilius: 350 Masses, 168 adoration hours, 293 resolves and 243 days of fasting.

All these prayer notes and ribbons travelled in the bishop’s luggage around America and across the Atlantic Ocean, were brought back to Kaunas in 1937 and remained there during the first Soviet occupation. Finally, when Teofilius became bishop of the diocese, they were taken to Kaišiadorys where they stayed until his return from deportations in 1956. Not found during the KGB searches in Birštonas and Šeduva, after T. Matulionis died in 1962, they spent another 55 years in the private archive of his niece Marija Bendoraitiene. Until this year.

The photos are courtesy of Prof. Stanislovas Sajauskas and Eugenijus Peikštenis, the closest relatives of Blessed Teofilius Matulionis, and the Lithuanian Central State Archives (LCSA). For example, there is a large photograph from the LCSA, in which all the Lithuanian political and church elite of the time inspects the Eucharistic Congress parade in Kaunas on July 1, 1934 from the stairs of St. Michael the Archangel Church. Everybody with a little knowledge of the inter-war history and the ability to decode the arrangement of people in the photograph, will see how poor were the relations between President Antanas Smetona and the Lithuanian Church, between the Lithuanian State and the State of Vatican, as Nuncio Antonio Arata was seated farthest from the president and the archbishop of Kaunas – next to Bishop Matulionis who had just returned from his imprisonment in Soviet Russia. 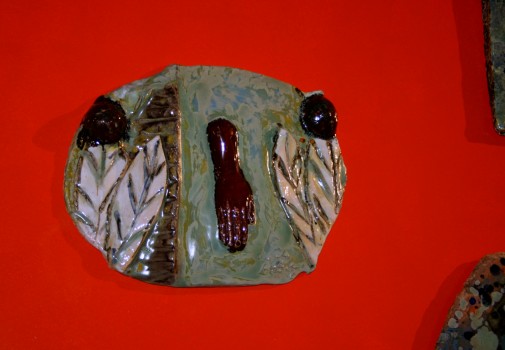 In Latin the word votum means a promise or a vow. It also stands for man’s words of devotion to a deity, a sacrifice. It can be used talking about gifts, tangible objects, offered hoping to get some favour from above, appease the gods or give thanks for things you have already received. This is a legacy of pagan Rome, illustrating the famous religious rule: I give so that you may give. I’m sure now some people are smiling reading these lines.

However, religious traditions and practices are not concrete blocks – they change and transform together with human history, from one epoch to another, from one community to another. It is doubtful whether even the pagan consciousness assumed it could buy or bribe the gods no matter the size or value of the gifts. Over time, the very act of offering began to matter the most. A sacred commerce, as Catholic theology calls it, will always be a loss to the other, heavenly, side. Luke writes how Jesus’ parents, sacrificed a pair of turtle doves and two young pigeons as a votive offering of gratitude to God for their son in the temple in Jerusalem. That’s it. In return for who was to become the Savior of the world? A child’s play really. Again, it’s funny.

That’s why it’s beautiful and sensitive to see those little objects clustering around holy pictures and statues. A human attempt to touch the world which is intangible. Those ex-votos are truly amazing! From silver and gold hearts, feet, hands, ears, eyes and torsos to swaddled babies, plates with standing or kneeling figures, horses, cows, locomotives and cars, expensive jewelry, and even military decorations. In one church there are tsarist army general regalia hanging on the crucifix. Perhaps the owner was tired of them or no longer needed them. In the past, the holy images famous for their miracles had special ex-voto books with accurate records of who, when, and on what occasion donated this or that votive offering. It was taken very seriously. Like important evidence.

Ceramic votive offerings by Vaidotas Žukas are, of course, a different story. They are not intended for any miraculous image. The artist probably did not think about sacred exchange either. He has been to hundreds of churches in Lithuania and abroad and seen tons of sacred art. All this from the very beginning runs through the artist’s work as a motif, color or metaphor. His ex-votos once again echo his old, faithful affection. Memories, analogies and comparisons that were inspired by his presence in the temple. 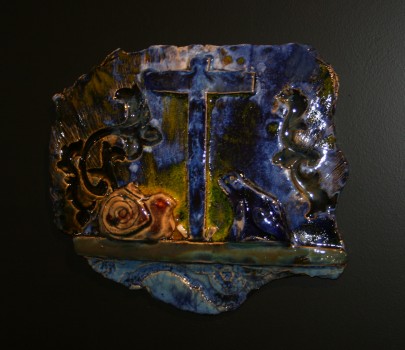 It’s not accidental that he chose to exhibit precicely sixty ex-votos – the number of the worldly years he has lived. Is it a form of gratitude for the years he has been given and all of their content? Or a believer’s wish to remember who runs the show, who you owe for your talent and other blessings? An ex-voto promise directed at the unknown future?
The same hearts, feet and hands, a head, flowers, snow covered fir tree, a cross, but this time they are made of clay. Clay is not silver or gold. No eternity here. On the contrary, it talks about the frailty of life. But once again are we too not made of clay – even the most famous, beautiful and talented of us? We break. Or maybe there is something that doesn’t? Beauty, soul, heart, soul ties, a look at the fir tree?

Vaidotas Žukas has been in the Bernardine church ever since its revival in 1994. And even before that, when it was used as the Art Institute’s warehouse. He comes and he goes. But it is clear that for him it’s more than just a monument or a place of a Sunday Mass. The church, after all, can be perceived as a huge ex-voto built, decorated, caressed with glances and prayers of many generations. Beneath its sacred vaults everything is strangely intertwined. Now the colorful shards of the ex-votos sparkle next to the fragments of the old polychrome wall, but we can imagine that a long time ago the whole interior of this Gothic church glimmered and sparkled just as Vaidotas’ votive offerings do now. 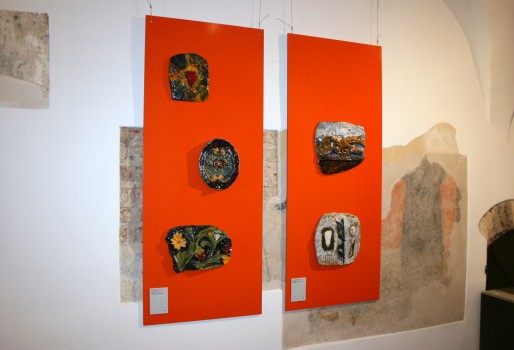 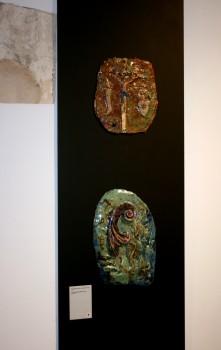 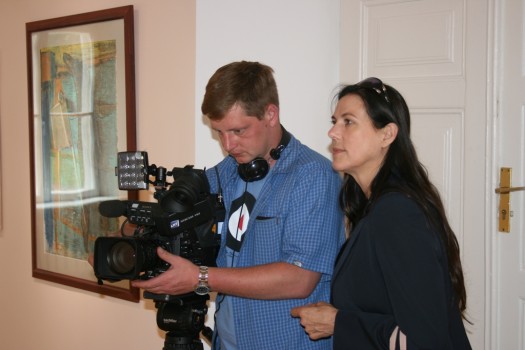 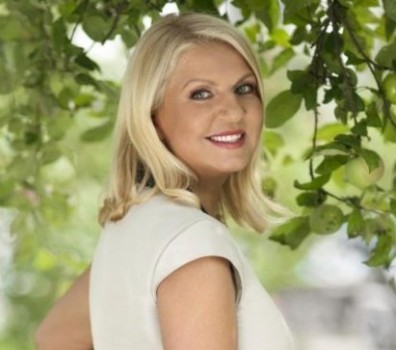 In 1991 Vaidotas Žukas created a 2-part film about Justinas Mikutis. Titled “Gooseberry Wine” the film includes interviews with 50 people, among them Vytautas Landsbergis, Tomas Venclova, Gennadi Aigi and others. At the time the Lithuanian National TV and Radio building was occupied by Soviet Army troops, so the film was edited at the Parliament, surrounded by barricades.


Warning: realpath(): open_basedir restriction in effect. File(/usr/local/fastcgi/cgi-bin) is not within the allowed path(s): (/home/cigarete/:/tmp:/usr/share/pear) in /home/cigarete/domains/zukasalanta.lt/public_html/wp-includes/functions.php on line 1846